Get A Free Estimate
Our Services

You’ve likely heard that there are some venomous spiders that can be dangerous to humans, such as the black widow or brown recluse spiders. Some spiders, on the other hand, while still venomous, aren’t harmful to humans. Continue reading to learn more about spider venom, why spiders bite, and which spiders to keep an eye out for — and if you are experiencing an issue with spiders in your home, contact our pest control professionals at High Country Pest Control today. Our experienced and highly trained team have the tools and knowledge to tackle any pest problem in Colorado Springs, Castle Rock, and the surrounding areas.

What Is Spider Venom and Is It Dangerous?

While most species of spiders are indeed venomous, the only two primary species known to be dangerous to humans are the spiders we mentioned at the beginning of this post — the black widow and the brown recluse. This is because black widow venom has a powerful mix of neurotoxins, including alpha-latrotoxin, that takes over their prey’s nervous system. According to a 2015 study that showed the effect of black widow bites, this unique neurotoxin travels to the presynaptic region of our neurons and inserts itself into the membrane, which causes all of the neuron’s vesicles to dump out their neurotransmitters, causing a tremendous amount of pain.

Brown recluse spiders, on the other hand, have cytotoxins in their venom which can cause tissue damage and infection if it is left untreated.

Why Do Spiders Bite?

Like most other animals that bite, sting, fight back, etc., a spider only bites if it is their last-ditch effort to save itself. Some people think that spiders prey on human blood when in fact, humans aren’t a part of the spider’s food pyramid. Their first line of defense when a spider feels threatened is to either run and hide or play dead — not bite. So unless they feel extremely threatened, you shouldn’t have to worry too much about spiders.

Another big reason for this is because of the fact that spiders have to be choosy with their venom. When a spider bites and uses this method of armor, it takes a while to replenish it again. The primary use for this venom is to trap and paralyze flies and other pests that they feed on, so wasting venom on us could mean that the spider could starve to death before its body can produce more of it.

What to Do If You Experience a Spider Bite

If you do experience a spider bite, it should never be taken lightly — especially if it does come from a black widow or brown recluse. A black widow bite can cause serious neurological issues if left untreated and can end up being fatal. Even a spider bite where no venom is injected should be closely monitored as it presents the risk of infection.

If you have experienced a spider bite (or suspect that you have), be sure to check in with a physician, especially if you experience symptoms such as dizziness, nausea, fever, vomiting, or headaches. Unfortunately, these symptoms can seemingly occur out of the blue because by the time that a person notices that they’ve been bit by a spider, the spider is often long gone or may have been smashed without noticing.

And, if you are concerned about spiders being in your home, High Country Pest Control provides thorough inspections in order to uncover spider hiding spots and can help you get rid of spiders in your home for good. For more information about us or our pest control services, give our team a call today. We are located in Colorado Springs and proudly serve the entire Front Range of Colorado including Castle Rock with professional pest control services for a wide range of different pests including insects, rodents, and more. 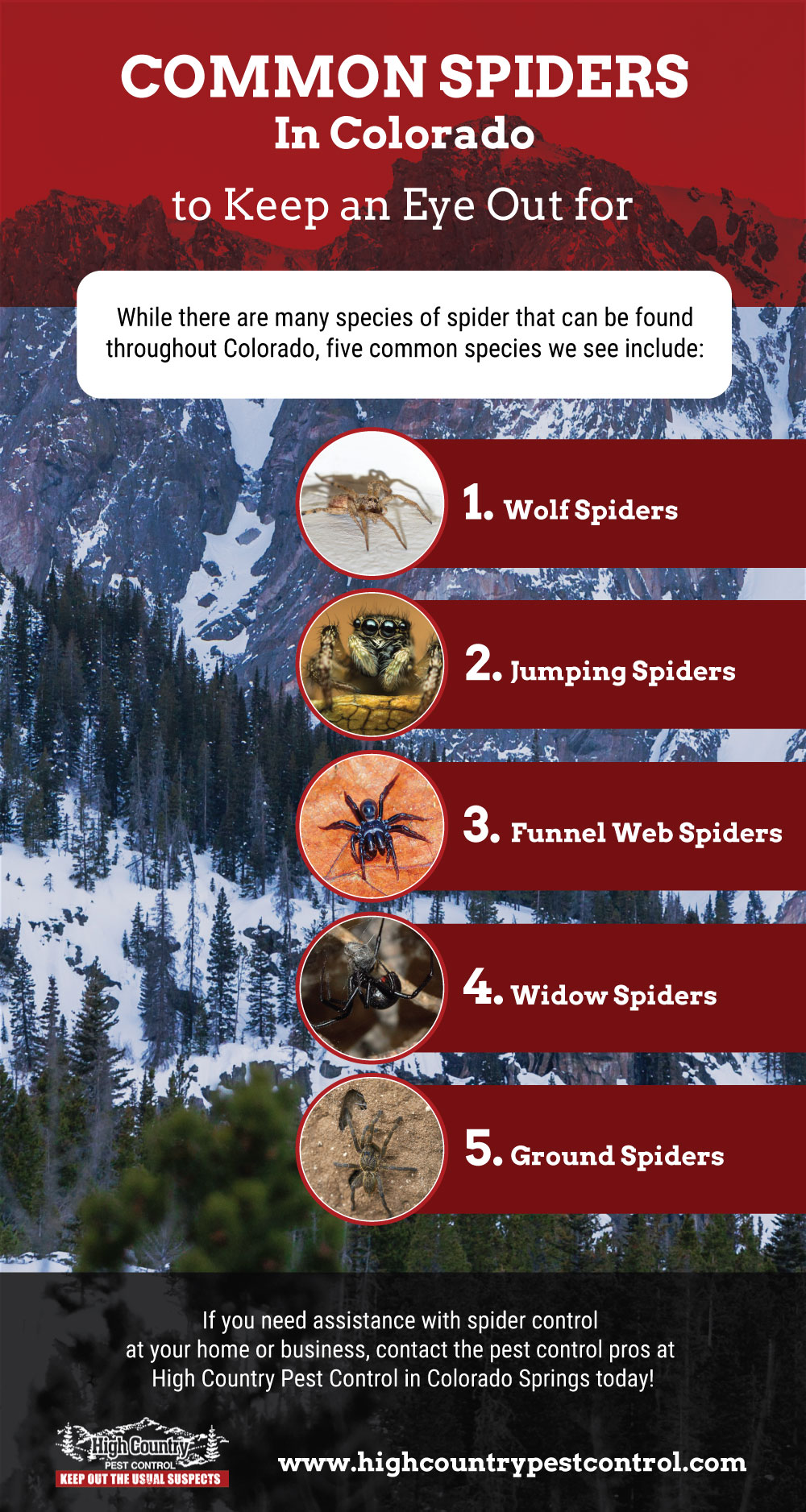