Get A Free Estimate
Our Services

If you take a walk outside during the summertime, you will no doubt see ants roaming about, bees buzzing by, and butterflies fluttering. But where do all of these creatures go when the weather gets cold and the wintertime approaches?

In today’s post, we will be covering how several different insects that are common throughout Castle Rock and the Front Range of Colorado survive the cold winter months. And, if you are experiencing an infestation or would like to be proactive about preventing future pest infestations, be sure to contact our professional insect pest control team at High Country Pest Control today. 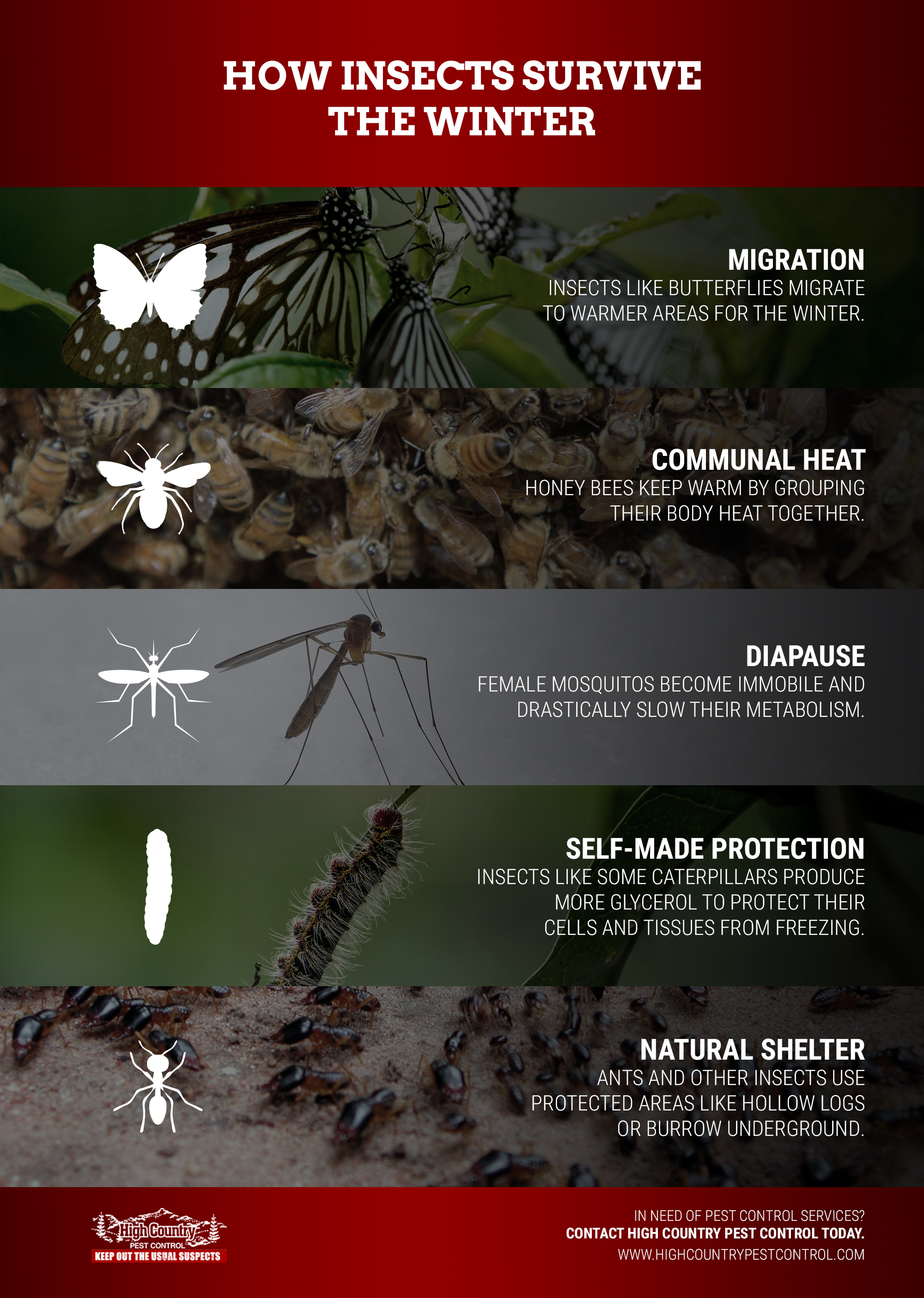 While cockroaches can survive cold, below-freezing temperatures, they cannot survive for long if the temperature reaches below 15°F. This is why they tend to move indoors through crawl spaces or into basements of homes to stay warm.

Spiders, similarly to cockroaches, can overwinter in their adult stage inside of buildings or outdoor shelters such as inside of crawl spaces or logs. A big reason for their inactivity during the winter months is that their prey species also have decreased activity.

Ants, on the other hand, have the ability to tunnel themselves underground in order to stay warm and avoid the cold Colorado temperatures. However, many ant colonies do not survive through the winter unless it is mild.

Monarch butterflies are the perfect example of an insect that migrates to warmer climates such as Mexico or Southern California during the colder months of fall and winter and return again come springtime.

While it may seem as though mosquitoes die off or migrate south for the winter months, female mosquitoes actually overwinter in a diapause state as adults. Female mosquitoes will stop blood feeding and increase fat reserves in response to shorter winter day lengths, seeking out areas such as burrows, storm drains, caves, and other areas where they can safely overwinter. Male mosquitoes, on the other hand, do not enter diapause and generally die off due to cold temperatures.

Ticks, like most other insects, also show different behaviors as the temperatures begin to drop. They often reduce activity levels in order to conserve water and produce/accumulate substances such as glycerol to protect themselves from freezing temperatures during hibernation. Some species of ticks, such as the American dog tick and the lone star tick, are not active during the winter months, while other species are active and seek blood meals as long as the temperatures are above freezing, such as the black-legged tick. Ticks are especially common in the spring due to the increase in host availability, which also plays a role in the spread of pathogens that cause disease.

If you are located in Castle Rock or along the Front Range of Colorado and are in need of professional insect pest control services this winter, spring, summer, or fall, High Country Pest Control is your go-to team. Give us a call today for prompt and affordable services for all of your pest control needs.